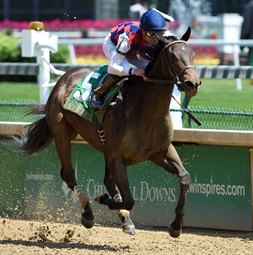 Three Chimneys Farm’s Carina Mia was on the outside looking in as far as entry into the Longines Kentucky Oaks (gr. I), but made the best of the situation by drawing six lengths clear of rivals in the seven-furlong Eight Belles Stakes (gr. II) at Churchill Downs on the Oaks undercard. Watch Video

The daughter of Malibu Moon, out of Miss Simpatia, by Southern Halo, got the trip in 1:21.74 over a fast track.

Marquee Miss broke on top in the Eight Belles and was pressed by Summer Reading through an opening quarter mile in :22.68. Carina Mia, the 3-5 favorite, was well off the pace under Julien Leparoux. Summer Reading stuck her nose in front on the turn after a half-mile in :45.52 as Blip N’ the Bye and Stageplay sat just off the pace.
Carina Mia made her move on the turn, and was pushed outside at the top of the lane for a clear run. With an open path she quickly made the lead ahead of Blip N’ the Bye and was well clear at the eighth pole after six furlongs in 1:09.43. There was no catching her with her final eighth in :12.23.Blip N’ the Bye was second and Nickname finished third.

The winner, trained by Hall of Famer Bill Mott, came into the Eight Belles off a sharp fourth-place finish behind Weep No More, Rachel’s Valentina, and Cathryn Sophia in Keeneland’s Central Bank Ashland Stakes (gr. I). Those fillies are the top three choices on the morning line for the Oaks.

“This wasn’t the original plan, but it certainly was our back up,” said Mott. “But we felt it was a race we would nominate for; she was already nominated to the Kentucky Oaks. Finishing fourth in the Ashland we fell one placing short of having enough points to get into the Oaks, but it wasn’t our plan to go directly to the Ashland, either. Actually, we were going to have a prep race before that, and it just didn’t work out because of the quarantine (at Payson Park).” The winner paid $3.20, $2.60, and $2.10. Blip N’ the Bye returned $10.40 and $5.20, and Nickname paid $2.60. The $2 exacta, 5-6 paid $36.20.