Volatile Always in Command in Vanderbilt 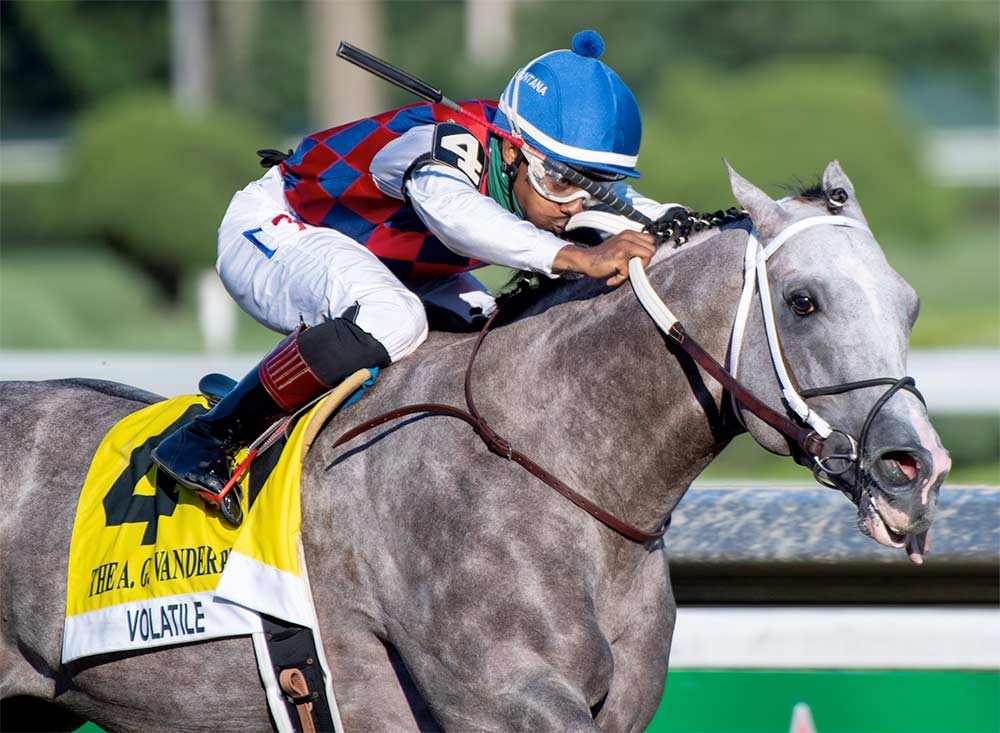 Whitmore spent some of 2019 chasing the now-retired Mitole , the eventual Breeders’ Cup Sprint (G1) winner and champion male sprinter for Hall of Fame trainer Steve Asmussen. Now a year later, he’s chasing another one of Asmussen’s speedsters, Volatile, a colt with the potential to perhaps turn out just as good.

At Saratoga Race Course July 25, Volatile showed off that talent, leading throughout over Whitmore, Mind Control, and Firenze Fire in the $232,500 Alfred G. Vanderbilt Handicap (G1).

Though Volatile was the least accomplished entrant going into the race, the Vanderbilt was never a fair fight. The race surprisingly lacked speed for a six-furlong event of high quality, and Volatile, who has largely stalked or pressed the pace over his career, became the pacesetter by default.

The gray colt cruised the opening quarter in :23.46, and though his rivals did their best to stay within striking distance, they proved unable to challenge him as the pace quickened. He neared the top of the stretch with a half-mile in :46.67 and then accelerated over the closing quarter-mile to clock 1:09.61 for the distance.

“Once he was away from the gate smoothly and they threw up the first quarter, he would be awfully hard to beat from there,” Asmussen said.

Whitmore, who stalked in third early, followed the winner with an inside trip and gave chase to finish 1 1/4 lengths behind. Moments before, he had broken through the gate prior to the official start, though he was quickly apprehended and eventually reloaded.

“He was a little nervous inside there, and then one of the horses on the outside moved and he just went through the gate,” said his jockey, Joel Rosario. “He’s a kind horse and easy to ride, so he broke out of there, but he wasn’t going anywhere.”

Mind Control, who offered only token pressure on Volatile down the backstretch, beat a wide-rallying Firenze Fire by a neck for the show. Mind Control was a half-length behind the runner-up.

Lexitonian was scratched by stewards on the advice of the track veterinarian at the gate prior to the start, just moments after Whitmore had broken through the gate.

The Vanderbilt was the second stakes victory of Volatile’s career following an eight-length romp in the Aristides Stakes at Churchill Downs June 6 in a stakes-record 1:07.57. On the strength of that win, he was the overwhelming 2-5 favorite in the Vanderbilt. He paid $2.80.

Though he didn’t run as quickly Saturday as he did in the Aristides, such a time would have been nearly impossible in light of the pace. His closing split was :22.94, an eye-catching final fraction more often produced by a quickening turf horse than a dirt sprinter.

“He was really on his toes today. Steve gave him a lot of time from his last race, and he was feeling great,” jockey Ricardo Santana Jr. said.

The 4-year-old son of Violence owned by Three Chimneys Farm and Phoenix Thoroughbreds has won five of six races and $341,040. He is 3-for-3 this year.

Asmussen commended his owners for their support in allowing Volatile to develop.

“He’s a brilliant horse. It’s nice to have a grade 1 win, and I couldn’t be more appreciative of the patience by the owners,” he said. “He’s always had tremendous talent, and they have shown tremendous patience and restraint to let him get to this level.”

It was Asmussen’s third victory in the Vanderbilt following scores by Majesticperfection in 2010 and Justin Phillip in 2013. Santana won the Vanderbilt for the first time.
In the winner’s circle is Darren Asmussen, Steve Asmussen jockey Recardo Santana Jr. and representing Three Chimney’s farm is Doug Cauthen after Volatile trained by Steve Asmussen won the 36th running of the The Alfred G. Vanderbilt at Saratoga Race Course Saturday July 25, 2020 in Saratoga Springs, N.Y.

Mitole was third in the race last year behind winner Imperial Hint and Diamond Oops, his only defeat in seven starts in 2019. He returned to win the seven-furlong Forego Stakes Presented by Encore Boston Harbor (G1) at Saratoga later during the summer meet before heading to Santa Anita Park that fall and winning the Sprint.

Volatile would seem a candidate for the Aug. 29 Forego Stakes Presented by America’s Best Racing—a race on the itinerary of Vekoma, the winner of both the Runhappy Carter Handicap (G1) and Runhappy Metropolitan Handicap (G1) this year—though Asmussen did not immediately commit to that race.

“We obviously feel the Breeders’ Cup is where we want to be with him at the of the year, and how we get there from here is going to be the plan,” he said.

Bred in Kentucky by Hill ‘n’ Dale Equine Holdings and Stretch Run Ventures, Volatile is the second stakes winner from his 10-year-old dam, the stakes-winning Unbridled’s Song mare Melody Lady. Her first, Buy Sell Hold, a full sister to Volatile, won the Kentucky Juvenile Stakes at Churchill Downs for Asmussen in May 2017.

Volatile was an $850,000 purchase by Kerri Radcliffe Bloodstock and Three Chimneys Farm from the Hill ‘n’ Dale Sales Agency consignment at the 2017 Keeneland September Yearling Sale.