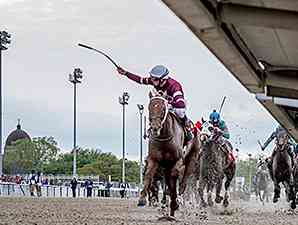 Ridden by Florent Geroux, Gun Runner, who paid $9.80 to win as the third choice in a field of 10, is headed to the Kentucky Derby Presented by Yum! Brands (gr. I).

“He’s a very quality horse,” trainer Steve Asmussen said. “We’re very excited about the race he ran today and looking forward to his next race.”

Candy My Boy, fourth in the Feb. 20 Risen Star, took the early lead and maintained control through fractions of :23.54 for the opening quarter-mile, :48.24 for a half-mile, and 1:12.94 for six furlongs with Dazzling Gem and Gun Runner in close pursuit. The latter took over past one mile in 1:38.12 and wasn’t threatened to the finish.

The final time for the 1 1/8 miles was 1:51.06 on a fast track. Tom’s Ready, seventh in the Risen Star, rallied for second, while Dazzling Gem held for third. Favored Mo Tom, a troubled third in the Risen Star, had an opening along the rail but was stopped again and finished fourth after a rally from far back.

A 3-year-old colt by Candy Ride , out of the Giant’s Causeway mare Quiet Giant, Gun Runner was bred in Kentucky by Besilu Stables. He has now won four of five starts; his lone defeat came last November in the Kentucky Jockey Club Stakes (gr. II), in which he finished fourth behind Airoforce, Mor Spirit, and Mo Tom.

The Louisiana Derby winner earned 100 points in the Road to the Kentucky Derby standings.

“The good thing is he’s very easy to manage,” Geroux said. “He has so many gears. He settles really nicely, and when you ask him to go, he has a nice turn of foot. It’s great (to have a Derby horse). I was in the Derby last year (with Stanford), but my horse was scratched. Hopefully we can make a nice run the first Saturday in May.”

Tom Amoss, who trains Mo Tom, said he needed some time to assess the race.

“It was a good race, but the pace didn’t set up the same this time,” Amoss said. “I really thought he ran a prepared race and a great race, I was just puzzled as to why (jockey) Corey (Lanerie) went down to the rail. I just hope he didn’t hurt my horse.

“I am surprised. There were other choices and I don’t understand why he did what he did. Watching this was like going to the schoolyard and watching your kid get beat up by another kid. It’s so hard to watch something like that with all the preparation we do. We will make sure he’s OK before we make any other decisions.”

“It was a bad ride and totally my fault,” Lanerie said. “He came underneath me and I had more horse than I knew what to do with. I got him in trouble and went inside when I shouldn’t have. I doubt they’ll let me sit on him again. He’s a great horse.”