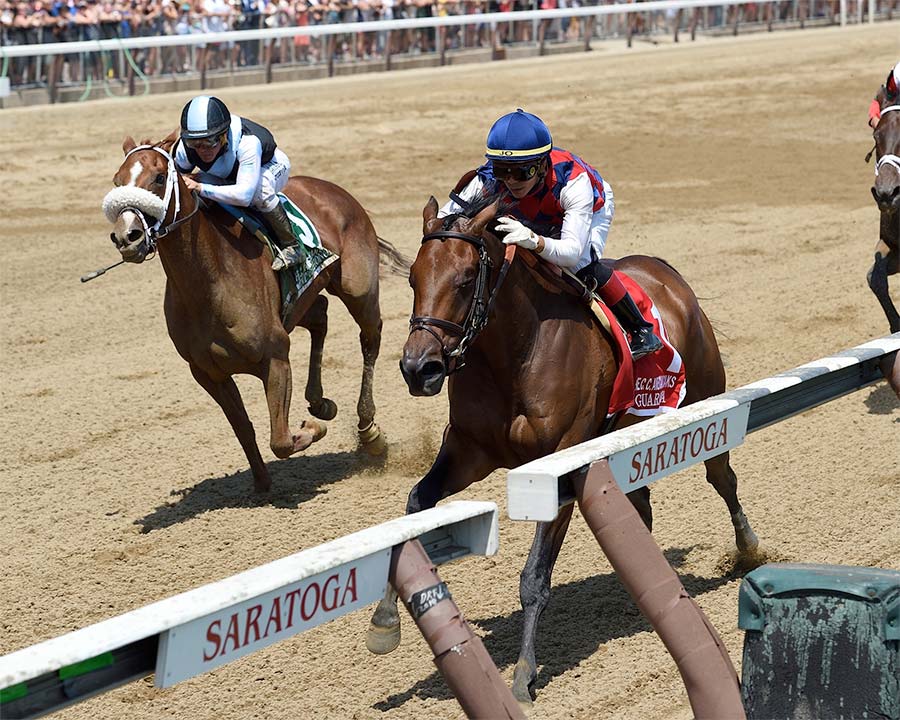 Despite veering out in the homestretch, the 3-year-old Ghostzapper filly passed her first two-turn test and held off a late-running Point of Honor to score back-to-back grade 1 wins.

“She handled a mile and an eighth well,” winning trainer Chad Brown said. “I thought she got a really good ride from Jose (Ortiz). Nice, comfortable fractions and had enough to get to the wire. The runner-up ran terrific as well. It was a good horse race. I think she got a little lonely out there towards the wire, but like Jose indicated to me, she was starting to get a little tired. She did overreact to the stick a little bit. It caused her to briefly come out, but she was well clear.”

Ortiz, aboard for each of Guarana’s three starts, took the 1-5 favorite straight to the lead and set soft fractions of :24.27, :49.49, and 1:13.58. Champagne Anyone pressed the pace to Guarana’s outside, leaving only a half-length between them. Off Topic settled in third with Boxwood on the rail and Point of Honor trailing in fifth.

Ortiz remained still in the saddle as Champagne Anyone and Off Topic drew even turning for home, but then Ortiz asked his mount to go and she drew off to a two-length advantage in the stretch, getting a mile in 1:37.16 and shying out at the sixteenth pole.

Point of Honor, winner of the May 17 Black-Eyed Susan Stakes (G2), rallied down the stretch, but Guarana held off the challenger by a length. The final time was 1:49.65 on a fast track.

Off Topic, Champagne Anyone, and Boxwood completed the order of finish.

“I had a very good trip. She broke very clean, and I went to the lead,” said Ortiz. “She was traveling very nice along the backside. From the three-eighths pole, I started feeling a little more pressure from Champagne Anyone and I asked her to start moving up, and she responded really good.”

The owners of Point of Honor claimed foul against the winner for ducking out in the stretch and causing interference, but the stewards ruled no change.

“She got into full gear when I switched her to the right lead, and she gave me everything she had,” Ortiz said of Guarana. “I wanted her to run a little faster and I tried to surprise her left-handed, and she overreacted. I was lucky I was clear, because if I wasn’t as clear, I would have come down because she did overreact.”

Javier Castellano, the jockey on Point of Honor, felt the incident affected his mount.

“She came out too quick and intimidated my horse,” said Castellano. “I did have to stop riding a little bit. She came out pretty far.”

Brown unveiled Guarana April 19 at Keeneland, where she romped by 14 3/4 lengths on a sloppy track. She then defeated Longines Kentucky Oaks (G1) winner Serengeti Empress by six lengths in the June 8 Acorn Stakes (G1) at Belmont Park. The bay filly has earned $697,400.

Guarana was bred in Kentucky and is the second foal out of the Distorted Humor mare Magical World. Her More Than Ready half sister, Magic Dance, won the June 29 Debutante Stakes at Churchill Downs and is 2-for-2. Magical World, a daughter of Emirates Airline Breeders’ Cup Distaff (G1) winner Pleasant Home, last produced a yearling colt by Pioneerof the Nile and was bred to Gun Runner this year.