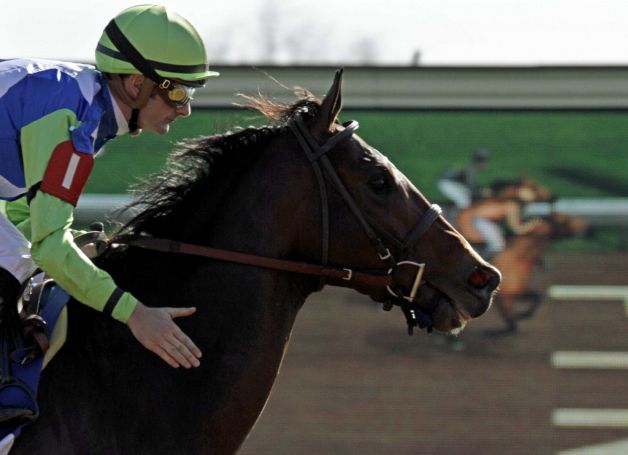 Lael Stable’s homebred Divining Rod came into the $250,000 Coolmore Lexington Stakes (gr. III) at Keeneland with the best credentials in the seven-horse field, having a runner-up in the Sam F. Davis (gr. III) and third-place finish in the Tampa Bay Derby (gr. II) for trainer Arnaud Delacour to his credit.

The 3-year-old son of Tapit did not disappoint April 11, swinging out from a tracking rail spot to easily overpower his foes while claiming his first graded score by three lengths in the 1 1/16-mile main track test.

Having set the pace in his two previous outings, this time Divining Rod rallied to win while covering the distance under jockey Julien Leparoux in 1:43.29 on a fast track. Donworth edged out pacesetter Fame and Power by a nose in a photo for second, and Comfort finished fourth after getting bumped at the start.

“That’s another dimension to the horse,” Delacour said. “Julien just took back; he thought there’d be plenty lot of pace. The horse relaxed well and was great with the (dirt) kickback, and he came with a big kick at the end. Today he was very professional and I’m glad he’s learning with each start.”

The Lexington score was worth 10 points on the road to the Kentucky Derby Presented by Yum! Brands (gr. I), and puts Divining Rod 21st on the leaderboard with 20 points. However, owner Roy Jackson said the colt will not start on the first Saturday in May.

Fame and Power, shipped in from California for Hall of Fame trainer Bob Baffert, was determined to make the early lead and did so under jockey Irad Ortiz Jr. to post opening fractions of :24.03 and :47.90 while maintaining about a length advantage. In the run up the backstretch, Fame and Power was soon tracked by Donworth and those two raced in that order to the head of the lane, posting three-quarters in 1:12.66 before Divining Rod joined the fray and quickly pushed past for a mile in 1:37.17.

“We knew there were a couple of horses with speed in there and we wanted to teach him something,” Leparoux said. “He was very proficient and very relaxed behind. The dirt didn’t bother him at all, and he finished up very strong.”

Bred in Kentucky out of the Catienus mare Precious Kitten, Divining Rod improved his career standings to 2-1-2 from five starts for earnings of $249,800. He was the second Lexington winner for Roy and Gretchen Jackson’s Lael Stable; they won in 2006 with Showing Up.