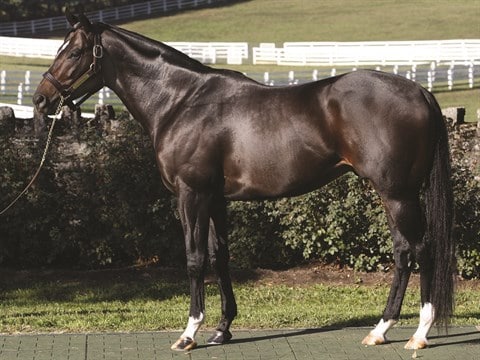 Darby Dan Farm’s freshman sire Dialed In held onto the title of leading North American first-crop sire, which he claimed after moving past Lane End’s Union Rags in late November.

Ms Locust Point was bred in Kentucky by Lesley Campion and sold for $17,000 by Paramount Sales through the 2015 Keeneland January winter mixed sale to Barzini Syndicate. She was offered again through the Keeneland September yearling sale but was bought back for $27,000 and now races for Jim Reichenberg and Bruno De Julio. So far Ms Locust Point has won twice and finished second once out of three starts and earned $105,000.

Union Rags was represented by a winner Dec. 31 but Painter’s Rags contested a $40,000 maiden special weight. Heading into Dec. 31, Union Rags was $71,357 behind Dialed In so even if Ms Locust Point hadn’t run, there wasn’t enough purse money to be earned to close the gap. Union Rags closed out the year with $1,457,070 in progeny earnings.

Dialed In and Union Rags also lead their sire class with three black-type stakes winners each. Ruffenuff, who won the Princess Margaret Stakes and Bird of Prey Stakes, both at Northlands Park in Canada, is Dialed In’s third stakes winner. Union Rags’ third stakes winner is Tequilita, who captured the Smart Halo Stakes at Laurel Park.

WinStar’s Bodemeister and Gainesway’s Tapizar had their own tight race for the bronze medal. Bodemeister was ranked in third with a $21,251 lead heading into the weekend. Tapizar had an opportunity to move up when his daughter Tap It All had been entered in the $75,000 Blue Norther Stakes at Santa Anita Park Dec. 29. Had she won this stakes, Tapizar would have replaced Bodemeister in the third-place spot, but she wound up finishing third.

Bodemeister then had his position reinforced by his stakes-winning son O Dionysus who finished second in the Maryland Stakes Dec. 31 and collected another $20,000 for owner Marathon Farms. The colt was bred in Maryland by Dark Hollow Farm.

Editor’s Note: A previous version of this story misidentified the owner and breeder of O Dionysus. The corrected information is above.