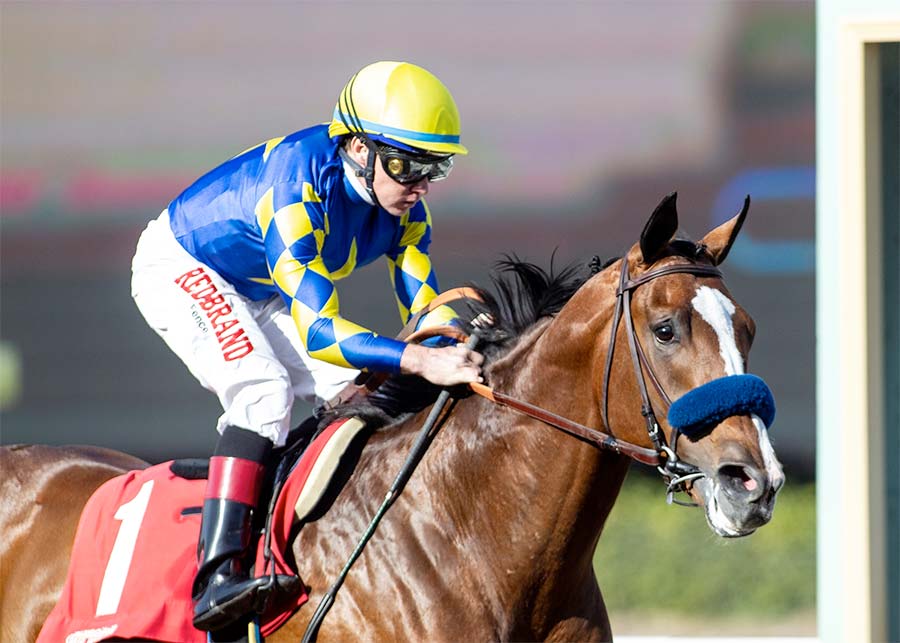 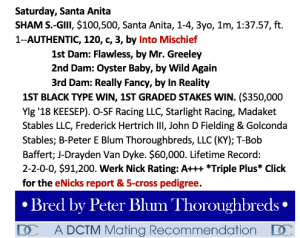 Authentic burst onto the Road to the Kentucky Derby Jan. 4, dominating five rivals in the $100,500 Sham Stakes (G3) at Santa Anita Park by a wide margin. There was plenty of room to spare as the 3-year-old Into Mischief colt shied down the stretch under jockey Drayden Van Dyke, who rode the bay out to the wire.

“I think the noise from the crowd made him react the way he did there in the stretch,” Van Dyke said. “His ears went toward the crowd, so I think that’s what caused it, but then when he got down to the rail, he spooked himself again.”

The Sham was the second start for Authentic, a debut winner for trainer Bob Baffert Nov. 9 sprinting 5 1/2 furlongs at Del Mar. The colt earned 10 points toward the Kentucky Derby Presented by Woodford Reserve (G1) with Saturday’s victory.

“I told Bob when he broke his maiden he was my favorite 2-year-old,” Van Dyke said. “He’s very talented.”

Authentic marked the sixth Sham winner for Baffert since the race first ran in 2001.

“He moves like a gazelle,” Baffert said. “He’s real light, he’s leggy. It was a big move forward. The second race is the toughest one to make.”

Authentic was one of two Baffert entries, along with Azul Coast for Karl Watson, Mike Pegram, and Paul Weitman. Authentic, the 8-5 favorite, broke well and took an unchallenged lead. Azul Coast, ridden by Joel Rosario, settled in last. Authentic enjoyed a 1 1/2-length lead over Uncaptured Hero through the first half-mile, setting fractions of :23.87 and :47.94.

Authentic ticked off three-quarters in 1:12.18 before his stablemate began to make up ground. The pacesetter proved much the best, though, despite showing some greenness. He opened up on the field, ducked in, straightened, and spooked again before settling down. Authentic crossed the finish line 7 3/4 lengths in front. The final time for the mile was 1:37.57 on a fast track.
Adequan

“You want to see him run like that, especially this time of year. We’ve got some other ones back there. Hopefully, they’ll come along, but the timing is good for him now to run in the March race,” Baffert said, referring to the March 7 San Felipe Stakes (G2) at 1 1/16 miles. The San Felipe offers Derby points on a 50-20-10-5 scale.

Azul Coast ran on for second, picking up four Kentucky Derby points, followed by Zimba Warrior (two) and Taishan (one). Scoring and Uncaptured Hero completed the order of finish.

Authentic was bred in Kentucky by Peter E. Blum Thoroughbreds. He is out of the Mr. Greeley mare Flawless, a homebred for Blum who has foaled two Bodemeister colts since Authentic. Flawless is expected to produce a Mastery foal this year.