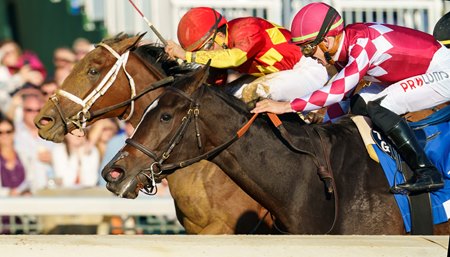 Clearview Stable’s Wonder Gal was a precious juvenile for trainer Leah Gyarmati, a stakes winner during the filly’s initial season in 2014 and the third-place finisher in that year’s 14 Hands Winery Breeders’ Cup Juvenile Fillies (G1) at Santa Anita Park. Now her daughter, the Mark Casse-trained Wonder Wheel , has a date in the same race, taking place at Keeneland Nov. 4.

Racing at Keeneland Oct. 7 on the opening day of the track’s fall meet, the D. J. Stable-owned filly earned a paid, automatic berth in the race by lasting for a nose victory before a packed grandstand in the $497,337 Darley Alcibiades Stakes (G1). The Alcibiades served as a “Win and You’re In” qualifier for the Breeders’ Cup Juvenile Fillies.