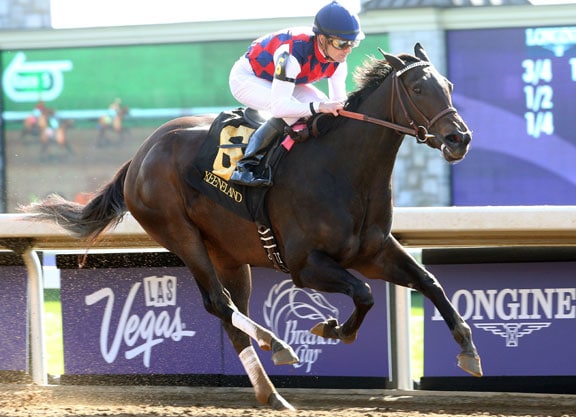 Maybe being excluded from the GI Kentucky Oaks wasn’t such a bad thing after all.

‘TDN Rising Star’ Carina Mia, an authoritative heroine of the GII Eight Belles S. on the first Friday in May in Louisville, made it two straight wins in style here after tiring to fourth while making her sophomore debut in a salty renewal of the GI Central Bank Ashland S. at Keeneland Apr. 9.

Sent off as the second choice in this spot as Kentucky Oaks heroine Cathryn Sophia took the bulk of the play, Carina Mia was well-restrained by Julien Leparoux at the rear of the pack in sixth behind an opening quarter in :23.05 and a half-mile in :46.17. Edging closer while still under a firm hold on the turn, the Three Chimneys Farm colorbearer spun widest of all at the top of the lane and easily dispatched the Oaks winner in midstretch to register a career high under a celebratory Leparoux. Off the Tracks rallied late to snatch second from Cathryn Sophia.

“We thought there was speed in there,” Hall of Fame trainer Bill Mott explained. “It actually turned out to be a little bit more than what we thought. Certainly Cathryn Sophia, it looked like they wanted to send her into the race a little bit.”

A jaw-dropping second-out maiden winner going 6 1/2 furlongs at Keeneland Oct. 29, the dark bay capped off her juvenile season with a wire-to-wire tally in a sloppy renewal of the GII Golden Rod S. beneath the Twin Spires Nov. 28. Carina Mia spent much of her winter under quarantine at Payson Park, and was left a bit behind the eight ball upon her aforementioned return in Lexington.

“Her first race came off a five-month layoff and things hadn’t gone just right,” Mott added. “She probably needed the race to get back in gear, I suppose. It is nice to get her a Grade I win.”

Leparoux added, “I thought I was going to be behind Cathryn Sophia and Go Maggie Go. But I saw them go away from there so I decided to just sit off of them. I felt confident at the top of the stretch. I came around everyone and she kicked on at the end. She’s a nice filly. We didn’t get to the Oaks, but maybe it was for the best because she won a big race today.”