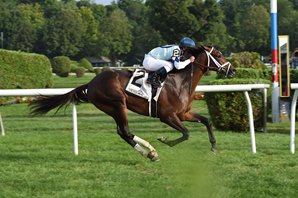 In many ways the $200,000 With Anticipation Stakes (gr. IIT) Aug. 31 at Saratoga Race Course proved to be a tale of two trips, as winner Made You Look found room inside after a ground-saving run while runner-up Keep Quiet raced three-wide throughout before finishing two lengths behind the winner.Watch Replay

Made You Look, favored at 8-5, secured a second straight win in three starts, all on turf, and his first stakes win for Let’s Go Stable and Three Chimneys Farm in the 1 1/16-mile test for juveniles. Trainer Todd Pletcher credited multiple Eclipse Award-winning jockey Javier Castellano with a top ride and the son of More Than Ready for being willing to punch through on the inside in early stretch.

“We were getting a beautiful trip; it was just a matter of whether he was able to find a spot to go through. I thought for a young horse to shoot through there was pretty brave on his part,” Pletcher said. “He’s been training really well, we were looking forward to a good effort, he got a good trip, and he delivered.”

Longshot Gemologister, a maiden, registered contested fractions of a half-mile in :49.34 and six furlongs in 1:14.14 as longshot Monsoon K S A stayed close early. But more eyes were on 9-5 second-choice Keep Quiet, three-wide about a half-length behind the top two; and Made You Look, who raced inside about a length behind the leader.

Made You Look held that inside position through the far turn before cutting the corner and forging to the lead with an inside bid. He drew clear in the stretch, completing the race in 1:43.12 on firm turf. Keep Quiet continued well to the wire for second, three-quarters of a length in front of Bird’s Eye View.

“I had a beautiful trip. The way he followed in the race, you don’t see too many 2-year-olds racing like that,” Castellano said. “The pace was slow and he was right behind the horse (in front). It set up beautiful. Turning for home, I didn’t have too much room and I had to squeeze a little bit inside the rail. It was unbelievable, he went right through and took off. The way he did it, he was phenomenal.

“I was concerned a little bit just to get him to go through it. He’s only run two times, he doesn’t have that experience to go through a little tiny hole but when I asked him, he went through like an old horse, like a well-bred horse. Those kinds of horses are (the ones) you want to ride because they’ve got great minds, especially 2-year-olds. He didn’t just sustain himself in that spot, he went through and he took off. I like that. He finished really well. Actually, I didn’t even ask him much, he just took off. He picked it up himself.”

Bred in Kentucky by the Robert and Beverly Lewis Trust, Made You Look is out of the Unbridled’s Song mare Night and Day. His second dam is champion 3-year-old filly and multiple grade I winner Serena’s Song. Night and Day is a half sister to group I winner Sophisticat and three other graded stakes winners.

Pletcher trained both Night and Day and More Than Ready.

“He’s got a fantastic pedigree, top and bottom side,” Pletcher said. “It’s a lot of fun for us to have a son of More Than Ready; it was 1999 when he won the Sanford (gr. II). He’s just been so good to our stable, not only him but all of his offspring.”

Pletcher said he will consider starting Made You Look in the Oct. 1 Pilgrim Stakes (gr. IIIT) at Belmont Park or training him up to the Breeders’ Cup Juvenile Turf (gr. IT).

Tags: Made You Look