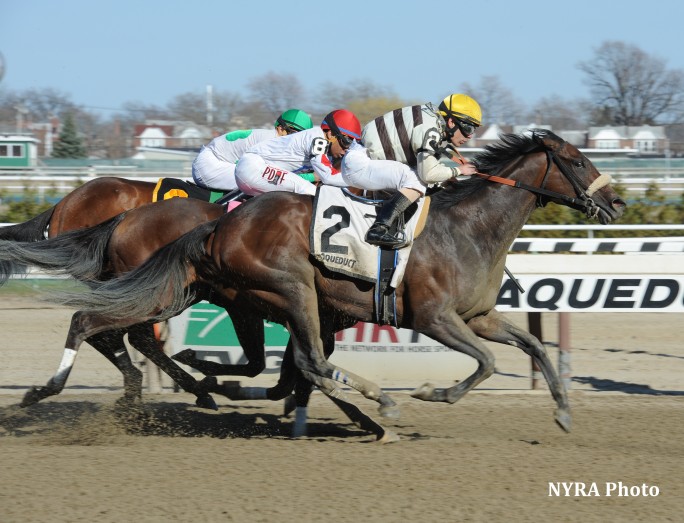 The only graded stakes winner in the field, Joseph Shields Jr.’s House Rules showed her class with a sustained outside rally and was up late to win the $200,000 Top Flight Handicap (gr. III) April 11 at Aqueduct Racetrack.

Toting the highweight of 120 pounds, including jockey Junior Alvarado, House Rules gradually reeled in battling front-runners Before You Know It and Shayjolie through the final furlong and edged ahead in the last strides for a half-length victory. Before You Know It was second, a head in front of Shayjolie.

The 2-5 favorite, House Rules stalked from fourth, along the rail early, while pacesetter Amulay clocked fractions of :24.66 and :48.74 through the first half mile, as Shayjolie and Before You Know It chased from second and third, respectively. Shayjolie edged to a narrow advantage as three-quarters went in 1:13.86 and had a half length lead from Before You Know It in early stretch.

With the front-runners in her sights turning for home, House Rules was angled to the three path to rally and gradually wore down the leading pair when finding another gear in the final sixteenth.

Trained by Jimmy Jerkens, who took over for his late father H. Allen Jerkens, House Rules improved to six wins from 16 career starts and boosted her earnings to $533,703. Her record includes a victory in the Rampart Stakes (gr. III) Feb. 21 and the Bal Harbor Stakes Jan. 2, both at Gulfstream Park, to start the season.

“I had a good trip the whole way, saving ground,” Alvarado said. “That’s what Jimmy (Jerkens) told me to do, so we could take advantage of our position by stalking and just seeing what horses I could follow. As soon as I tipped her out at the five-sixteenths pole, I thought I had them already, but the horses in front all of (the) sudden started to get away from me before I started asking my filly. But I have to say, I had the best horse and that’s probably why she was able to get up and get the win at the end.”

House Rules, a 4-year-old Distorted Humor filly, was bred in Kentucky by El Catorce Inc. and WinStar Farm, and was a $90,000 Keeneland September yearling purchase by Leverett Miller, agent, when offered by Four Star Sales. Her dam is Argentine group winner Teamgeist, a daughter of Mutakddim who finished third in the 2009 Juddmonte Spinster Stakes (gr. I) at Keeneland.

Joint Return was fourth, with Agawa, Holiday’s Jewel, Jcs American Dream and Amulay completing the order of finish in the race for older fillies and mares.