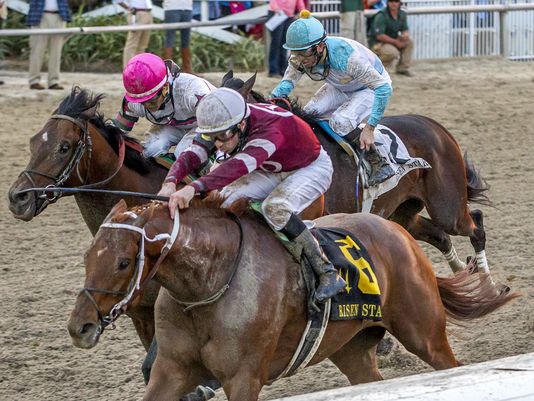 Most voters in The (Louisville) Courier-Journal’s Kentucky Derby Top 20 Poll listed Gun Runner in their initial rankings last week despite his disappointing fourth-place finish in Churchill Downs’ Kentucky Jockey Club Stakes and amid a layoff since then.

The Steve Asmussen-trained son of Candy Ride rewarded their loyalty with a 1/2-length win over Forevamo in Saturday’s Grade II, 400,000 Risen Star Stakes at Fair Grounds in New Orleans. Now a major player on the Road to the Derby, the chestnut colt subsequently jumped from 13th to 5th in this week’s Kentucky Derby Top 20.

“Gun Runner was well regarded late last year and showed why with his Risen Star victory, one which he figures to improve off of,” said the Lexington (Ky.) Herald-Leader’s Alicia Wincze Hughes.

The C-J’s 15-member national panel, with members stretching from New York to California, once again tabbed Mohaymen an overwhelming No. 1, with champion Nyquist 2nd after winning his 3-year-old debut. No. 3 Mor Spirit was followed in the poll by Exaggerator, the horse Nyquist topped in last Monday’s San Vicente Stakes, a Grade II test at Santa Anita Park.

Nyquist was ultra impressive sprinting in his 2016 debut but has to do the same going long before he moves past Mohaymen,” said TVG’s Caton Bredar.

Mo Tom ran a troubled third in the Risen Star, forced to check up in the stretch while trying to run by on the rail. He continued moving forward despite suffering a gash on one of his legs.

“Gun Runner was victorious after a perfect trip, but Mo Tom caught my attention after he was compromised severely by a troubled trip,” said Gulfstream Park handicapper Gabby Gaudet.

Hank Wesch, formerly of the San Diego Union-Tribune, and now a member of Del Mar’s communications team, ranked Mo Tom ninth on his ballot. He has a tendency to root for horses named after his youngest son, Tom.

“Surefire losing strategy, probably,” he said. “But what’s a sentimental father to do?”

“Off that performance I kept Mo Tom in my Top 10,” Wesch added. “And if Mo Tom is in the Derby, and if I know me, I’ll support him. Even if it means walking away muttering “I should have named that kid (Nyquist/Mohaymen/Mor Spirit).”

The Top 20 Kentucky Derby contenders as voted on for Sunday, Feb. 21 by a national panel of 15 horse racing media members, with first-place votes in parenthesis. A weighted points system determines the consensus rankings.