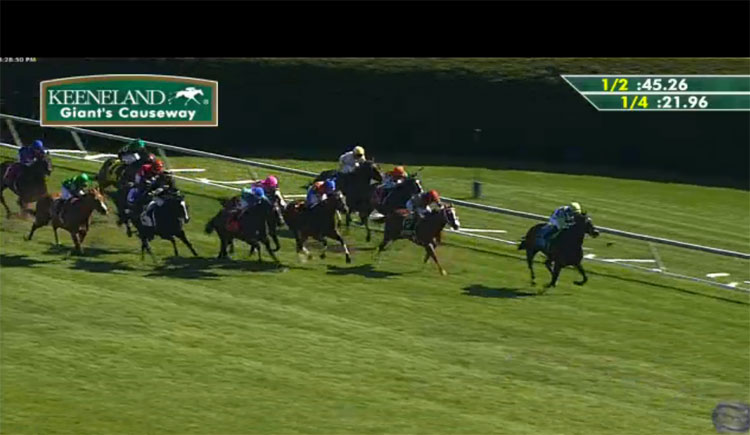 LEXINGTON, Ky. – It wouldn’t be hyperbole to state that Exaggerated is a rising star in the female turf sprint division. The consistent filly was facing her toughest challenge yet in the $100,000 Giant’s Causeway Stakes on Saturday afternoon at Keeneland – and wired a full field that included seven other stakes winners.

Under Julien Leparoux, Exaggerated ($22) was away fastest of all from post 9 in the field of 12, and edged her way to a length in front through a hotly-contested first quarter-mile of 21.96 seconds.

“She broke great, and she was kind of keen the first part,” Leparoux said.

Exaggerated had cleared the field by the half, which she clicked off in 45.26. As she cut the corner, a host of pursuers attempted to make up ground, but Exaggerated continued to kick on well, hitting the wire 1 1/2 lengths in front and finishing the 5 1/2 furlongs in 1:02.81.

Cactus Kris, who rallied widest of all down the outside of the track, was up for second by a neck over Miss Double d’Oro. She was another nose in front of Lindisfarne, the longest shot on the board, with favored Miss Ella another head back in fifth. The finish triggered an $814.60 exacta payout, $6,686.40 on the trifecta, and $15,952.53 on the superfecta.

Exaggerated, a daughter of Blame campaigned by Roy and Gretchen Jackson’s Lael Stables, has now won 5 of 7 career starts, and has only missed the top three once. She is a perfect 4 for 4 at the 5 1/2-furlong distance.

“She does it on her own,” trainer Arnaud Delacour said. “She has a lot of speed, and she keeps improving. We’ll just have to keep her together.”