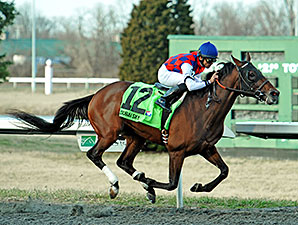 With Jose Lezcano aboard for trainer Bill Mott, Dubai Sky earned 50 points on the “Road to the Kentucky Derby” standings board. The Kentucky-bred colt by Candy Ride out of the Chester House mare House of Danzing wasn’t nominated to the Triple Crown through early nomination period.

Dubai Sky, whose first four races were on turf, broke well from post 11 on the far outside and landed good early position just off the leaders in the 1 1/8-mile Spiral. Watchyourownbobber and Wireless Future dueled through fractions of :22.99 for the opening quarter-mile and :47.57 for the half-mile with Royal Son not far behind and Dubai Sky to his outside.

Wireless Future held the lead through six furlongs in 1:12.09 as the field began to bunch up on the final turn. But it was Dubai Sky who swept past in the lane after one mile in 1:36.98 and pulled away to win by 2 1/4 lengths over Conquest Typhoon, who loomed large off the final turn but flattened out in the final sixteenth of a mile.

Dubai Sky—racing on furosemide, also called Salix or Lasix, for the first time—completed the distance in 1:50.26. He came into the Spiral off of a victory in the Kitten’s Joy Stakes, a one-mile turf event at Gulfstream Park.

Lezcano, who also won the Pure Romance Bourbonette Oaks (gr. III) aboard Pin Oak Stud’s Don’t Leave Me the race before the Spiral, said Dubai Sky was sharp in his first start on a synthetic surface.

“My horse really took off when I asked him,” he said. “I thought the outside would be better today. He took me to the quarter pole, and I saw Mike Smith (aboard Conquest Typhoon) behind me and said, ‘It’s time to go.’ ”

When asked if the Kentucky Derby Presented by Yum! Brands (gr. I) is a possibility for Dubai Sky, Three Chimneys chief operating officer Chris Baker, who was on hand for the race, said members of the team would have to discuss it. The late nomination deadline for the Triple Crown races is March 23 at 11:59 p.m. EDT.

“With him getting 50 points, we’ll take it under serious consideration,” Baker said.

Baker noted it was the first graded stakes win for the partnership between Three Chimneys and Besilu Stables, whose principal Ben Leon Jr. bred Dubai Sky.